we should have been graced by running across the southern lakeland yesterday but sometimes, and maybe for some good but unknown reason, life takes a different turn.
karen came off one of her horses on saturday but it wasnt until sunday morning that we ended up going to a and e for an x ray. all that put a sad stop to our trip north.

but as i mentioned in our last post, this year is a year of discoverings and new feelings and thats what we got yesterday. a briefer than planned run was had around the beautiful goyt valley in the afternoon. its not a time we usually run unless taking part in an actual ultra so i convinced myself it was a good idea after all.
along the valley there were too many people around for my liking but once up high it was a place for only the more hardy souls. although it was a fairly bright day, the wind and chill would have cut to the bone if not adequately geared up. snow and ice were still clinging onto to the tops for dear life as though this might be the last time they pay a visit this winter, though i doubt it.

i believe things happen for a reason and plans subsequently change. i'll never know how it would have been had we headed to the lakes. that's life i guess.
Posted by ultra collie at 08:57 2 comments: 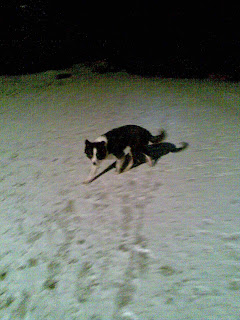 i'm now starting to have the realization that the more i run the more i love it and the more i find some aspect of each and every run to love that maybe i'd never thought about before.
last night after work me and charlie did a nice clip round rudyard lake in the dark. it was unusual as we dont usually run at night, but something was calling me and i felt compelled to do it. and so we got a reward of running on a still dark night which i found different to running in the early dark hours of the morning.
this morning we were out again, 5.30am, pitch black, snow and sleet hurtling down from the skies above. we could have just stayed in bed but i had it in my head to get one more run in before our trip to the lakes on sunday for our first proper outing of the year. we've run in such conditions many times, perhaps begrudgingly, but this morning i just so enjoyed it for what it was...a run in a cold, dark, blizzard. the light from my headtorch simply lit up the snow and sleet pounding our way giving a feeling of running in a void, with no visibilty beyond a foot or two in front of me. and i loved it! there was no way of referencing our progress other than to know that we were making progress with each step we took (and luckily were on a very familiar route). maybe ive felt this before, but today it was very much in my conscience, feeling what was happening rather than simply running through it without thought.
we're, or should i say 'i'm', firmly back on track. last friday i met up with my long time running friends steve, steve, and steve. we were all feeling a bit of new year rust so off we popped to the track for a hard explosive session. it worked! since then i can feel a momentum and fluidity returning to my running. and with it sheer enjoyment.
Posted by ultra collie at 09:41 6 comments: 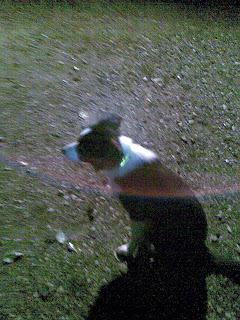 that should be enough.some familiar races and a few new ones.
Posted by ultra collie at 11:40 4 comments: 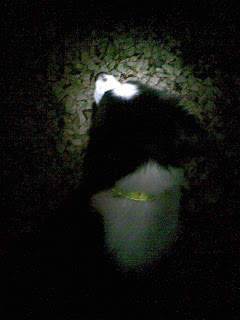 ...just like i thought it would be.
three days into my, lets call it, more moderate diet ie no booze / limited salty snacks, add in the resumption of hard sessions and the difference is amazining! mind you, for charlie it's carry on regardless..nothing's changed...he just does his thing day in day out.
i can already feel an emergence away from 'excess' to a feeling of greater vitality and positivity. i hit a physical high around july - october last year but since then stupidly let it slowly ebb away. it happens every year but now we move once again to all things that are good.
this morning in the early hours we trotted around a short 4+mile route through the tiny lanes in the sticks where we live. the other day the route felt tortuous. today, i felt a little lift with every step and charlie didn't get too far ahead.
tomorrow, it's a track session. 2 x 8 x 200's. a great session to 'open you up'.
Posted by ultra collie at 10:20 5 comments:

a week ago i was supposed to start behaving myself..putting beer and crisps to one side. somehow i managed to con myself into thinking i was ok not to bother with such pathetic abstentionism (is that a word?). a quick look on the scales this morning followed by a lousy run, where charlie was so far ahead he was nowhere to be seen at times (ok it was also pitch black), were enough for me to say enough is enough. no more until the end of february..that's extra time a bit like dentention for being naughty at school.
i reckon charlie, who doesn't inbide in excess like me, is a wee embarrassed by my current state and will be looking for a new running buddy if i don't get my act together. he's got his reputation to uphold now with his celebrity status and i might be the first casualty of that if i don't buck my ideas up!
here goes.
double training today. kenyan hills for lunch!
Posted by ultra collie at 09:33 7 comments: 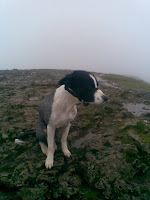 i never thought i'd here myself say it, but how happy were me and the pooch to see the temperature rise, the rain fall, and the frozen ice melt way!
on sunday we tripped (or should i say slipped) around the macc forest/goyt valley area for three hours. it tough going at the best of times but there was so much of our route that was unrunnable because of sheets of ice that had formed downs the paths/gulleys and even on the grass moor itself. it's the first time i've seen so many bikers pushing their bikes. like all outings it was fun in one way or another but its nice to know that for however long before the next freeze we can run without the threat of a hospital pass thanks to the ice.
Posted by ultra collie at 15:18 1 comment:

...due to ice
damn. we got out at 5am again to have another trip round the lake (pictured but not this morning). alas we would have been better equipped with skates. some rain and an overnight freeze made it well..bloody treacherous to say the least. so unfortunately we retreated tail between our legs.
soooo...lots of running this weekend then my training plan kicks in. welcome back kenyan hills, track sessions, long tempo runs and of course lots of lovely x-c, trail, fell and moorland miles :)
Posted by ultra collie at 13:22 4 comments:

can dogs see in the dark?

this morning me and charlie had one of our frequent early morning outings at 5.30am.
it was (obviously) pitch dark, apart from the illumination from my head torch, with a crisp white underfooting.
watching charlie hurtling along in the distance (he has a small flashing disco collar so i can keep an eye on him) through the trees, leaping across ditches it suddenly occured to me 'can he see in the dark?'. why i've only just thought of that i'm not sure but now i have i should try to find out!
(sorry no picture today...i took a couple but my computer's playing up uploading them)
Posted by ultra collie at 17:37 4 comments:

zen and the art of monk-like living 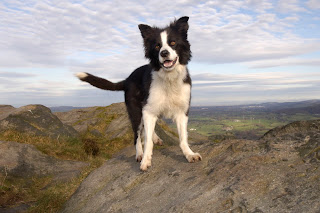 that's it! all the festivities over.
i tried as much as possible (which wasnt much) to get some balance between wine/beer/snacks and running so i could enter the new year with minimal excess baggage. i failed, but not as badly as previous years.
charlie on the other hand only excessed on turkey, bacon and sausages (oh and a roast beef dinner last night) so he's ready to race.
anyway we got out quite a lot, the highlight being a 20mile trot out over the roaches area and a very peaceful early morning saunter round macc forest.
so now its back to living like a monk...no beer/wine or snacks for the next 6 weeks or so.
we're tempted to do the ultra running series grand slam ie 12 races. we'll see.
next stop 'that's lyth' up in the lakes on 25th jan. our first test to gauge our fitness levels and enjoy inspiring views along the way.
Posted by ultra collie at 13:47 10 comments: