keep off the moors...

..stick to the roads 0530. its pitch black outside. and a pea souper. so it's on with the headtorch and charlie's flashing collar

out we head. into the thick of it. i can bearly see a thing. i see things only once I'm on top of them. my light illuminating only the nearest vapour drops flying through the air at me.

we leave the road. charlie goes off lead, into the darkness

the occasional moth divebombs my face
im garrotted time and time again by low lying cobweb lines
as i pass the lake a kerfuffle starts..is someone in there trying to bag wild ducks?? i can't see, only hear. whatever it is im not hanging round to find out so i put my foot down
every so often i call out for charlie, just to check he's still around and we're agreed on the route
a light in the distance comes closer. a cyclist. i bid good morning as we pass. no reply. not even a mad ha ha ha laugh, grim reaper style. i pick up the pace again to make good our getaway.
gradually the dark fades, the fog starts to lift
we enter a field. charlie sends rabbits scattering in every direction.
the bullocks stir, their eyes lit up by my torch, their minds lit up by charlie. time to get the lad to heel
soon we're home. no sign of life yet apart from sid sat by the back door awaiting his breakfast munchies

so here we are again, another 5 months plus of this until spring, and its light mornings, comes and visits us once again

if you can't change something, embace it
Posted by ultra collie at 07:08 20 comments:

its taper time in our household. but not for me and charlie. for these two little chaps (or chappesses). 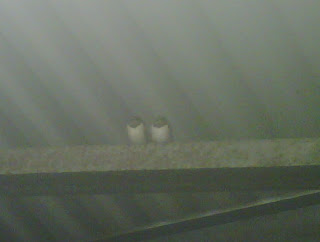 born around 10-12 weeks ago in our barn, i get the feeling they're preparing to leave soon with their mum and dad.

they'll be travelling over 5000miles to spend their winter in South Africa. 5000miles! they travel through western France, across the Pyrenees, down eastern Spain into Morocco, and across the Sahara.

they migrate by day at low altitudes and find food on the way. despite accumulating some fat reserves before crossing large areas such as the Sahara Desert, they are vulnerable to starvation during these crossings. migration is a hazardous time and many birds die from starvation, exhaustion and in storms.

migrating swallows cover 200 miles a day, mainly during daylight, at speeds of 17-22 miles per hour. the maximum flight speed is 35 mph.

i'm in absolute awe of these little fellas and the task that lies ahead of them. hats of to them. the swallows have been coming to our house ever since we moved in 15years ago. nesting in the same barn amazes me..how do they pinpoint it with such accuracy? their arrival and departure signal change.

it kinda puts doing 100 miles into perspective don't you think?
Posted by ultra collie at 13:53 7 comments:

one step beyond (OMG) 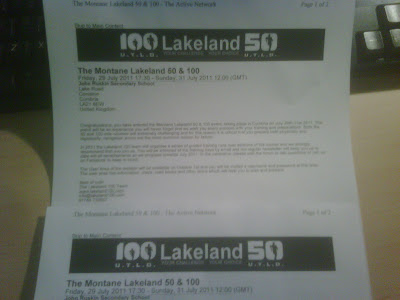 WHAT HAVE WE LET OURSELVES IN FOR???

(and in case you're wondering, my 4 legged sidekick will be doing all the training/recceing and then nearer the time we'll take a call on how much of the 100 he'll do, subject to logistics of drop off / pick up pooch points)
Posted by ultra collie at 14:07 13 comments:

well my friends i can forgive you for asking ''what is this 'the four trigs traipse'?''

let me tell you.

its a TOTALLY NEW anytime challenge that involves traipsing around, yes you guessed, four trigs!

having spent more time in the pub than out on the moors since the Lakeland 50, this weekend was earmarked to signal my return to a longer distance outing. i was down to run the ldwa's 'where eagles fly' yesterday but a number of reasons culminated in a decision to stay local. so sitting outside my local, the Knot Inn in Rushton Spencer, on a glorious Friday evening, quaffing a couple of alcoholic beverages, i pondered a route i hadn't done before in its entirety to try to avoid any issues of repitition and boredom. and this my friends was the result of said ponder.

you heard it here first. i'm sure its bound one day to be registered as a 'classic'!

right then the traipse.

its a 27mile round robin (with anywhere between 4000-4500ft ascent, though i really dont have a clue) that starts from the Knot Inn and traipses up to The Cloud, Shutlingsloe, The Roaches, The Gun and back to the Knot. About 3 miles tops of tarmac the rest off road.

And here it is in glorious technicolour.

Trig 1, The Cloud.
an early start meant we were rewarded with the back end of sunrise. in the distance you can see our next trig, shutlingsloe, waiting our arrival. 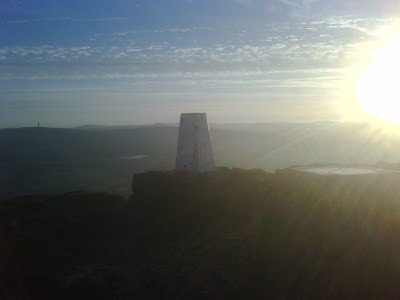 from the cloud, its down the gritstone trail leaving it eventuality to head into wincle, up to the wild boar, hammerton knowl, higher nabbs, dropping down to the cragg inn and then up to..

Trig 2, Shutlingsloe
again in the distance, our next trig, the roaches 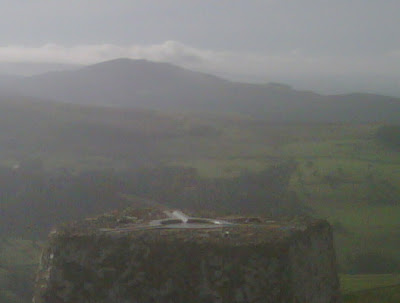 descending shutlingsloe we head over, via tagsclough hill, to gradbach yh (the cafe was closed and our supplies were getting low) and up through forest wood to roach end
(here we were met with what i thought was a mirage which turned out to be real and a saviour too, supplying cold coke and crisps to revive dropping energy levels) 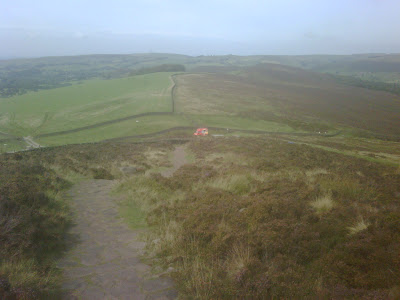 and then, coke and crisps in hand, we arrived at

Trig 3, The Roaches
i dont need to say it but if you look carefully you can see...in the distance 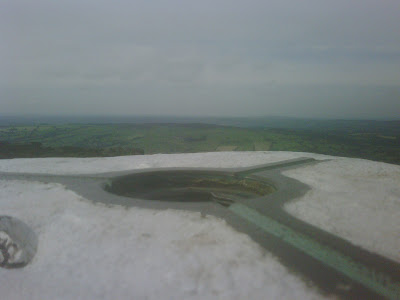 from the trig we head along the roaches to rockhall, windygates and cross country to meerbrook. here we head on to lower wetwood and up to oldhay top before our final ascent over the gun moor to 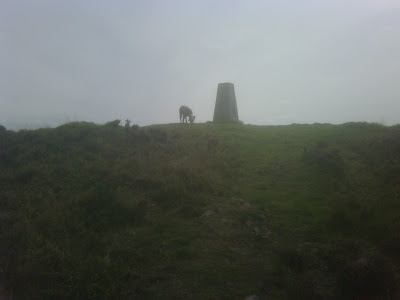 off the gun, and head down back into rushton village and whatever takes your fancy at the knot

so there you have it, the birth of a new anytime challenge, The Four Trig Traipse. simply four trigs to traipse around.

i hope you get the chance to enjoy it too
Posted by ultra collie at 06:45 12 comments: