in fact, where i live, a whole load of these helpful little blighters have just popped up out of nowhere. 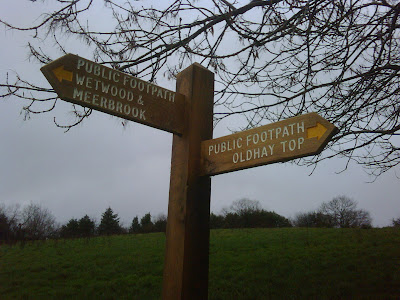 word must be out about how navigationally challenged i was this year.
the name 'wetwood' perfectly illustrating the conditions we ran in yesterday 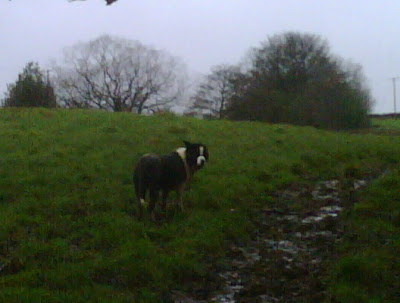 one big goal. one big adventure. inspired by nothing more than sheer lunacy, eternal optimism and an undying love of the north of england, we're heading off in 2010 to run wainwrights coast to coast route. 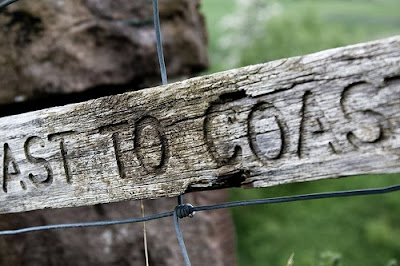 Charlie is charged with leading the way and we'll be accompanied by two workmates, Richard and Guy.

A challenge it will no doubt be, seeing us stopping off in the following places and staying in some fine hand picked hostelries to refuel and rehydrate

so whilst this is our big fun event, myself and the pooch have a few training event outings planned too..all for the fun of it not the time

i genuinely feel excited once again about everything and its translating through into a new found enthusiasm to run and train.

already im at the end of week two and on track in the training plan, and although there's a long way to go and a few hellishly high mileage weeks next year to get through, i really believe its totally doable

hardly a cloud in sight...

...apart from the one we're standing on

looking back towards home and rudyard lake.. 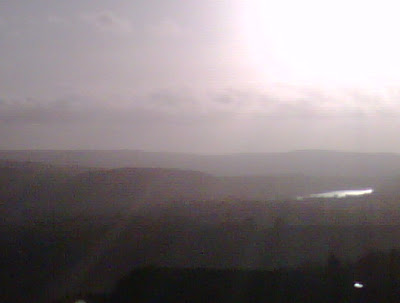 and over to the peaks and shutlingsloe 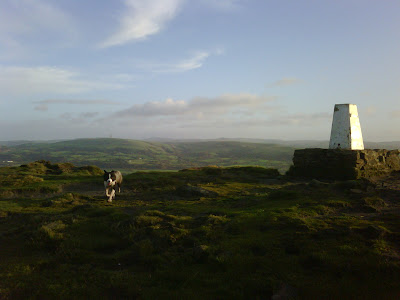 we're getting closer to finalising our plans for 2010
our lay off from events has allowed me to get back to enjoying my runs, when i want to do them and where i feel like going...and with whom
my lunchtime runs are coming back in more and im enjoying my harder sessions of track, tempo and kenyan hills
but going with the wind has been me recently
take this weekend..what to do? langley 7? the roaches race? no to both..a good threshold session saturday then a lovely muddy 4m xc on sunday
but wait, there was more..why not go out for seconds and accompany mrs uc on her hack out on 'the fredster'..a lovely way to spend another hour and race him up the ascents! 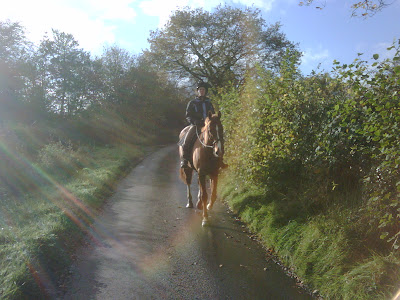 well, as well i knew, i was no match as he trotted with ease up said hills. i did my best. hitting somewhere between full out and kenyan hill efforts. a great hill interval workout. on the cuff and a smile on all our faces.
we're coming back. you'd better believe it.
Posted by ultra collie at 12:18 3 comments:

a cunning plan (or was it) 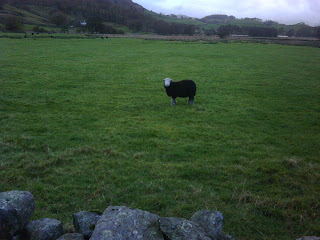 prior to heading off to the lakes for mrs uc's birthday celebration this weekend i thought i had my 2010 plan signed , sealed and waiting delivery. having been to, and come back from , the lakes i'm not so sure about that plan.

the original draft 2010 plan was to consist of periodisation, as mentioned in a previous post, taking me back on the road for a while to get my speed up.

up in langdale i was faced with a simple option. run the langdale half road route or potter off across the trails and fells on a route unknown to me.

it was a no brainer.

there was no debate. no interrogation. no tossing of coins.

and once i'd finished my run, my feelings totally vindicated my decision. 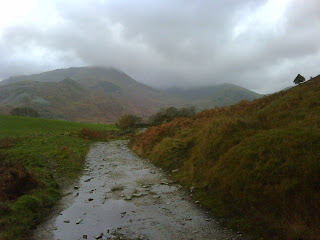 by now i'm sure you'll know my choice was the latter. favouring my joy of off road running for the 13 miles of tarmac slapping.

and what a lovely run it was. armed with just a route outline (no map) and a bottle of water i headed off on this 9.5m/1500ft route with gay abandon (at 3 something pm , not realising how quickly the light can dissapear these days!) 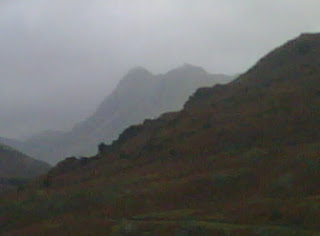 anyway, this simple trail / low level fell route took me from chapel stile to elterwater to little langdale, over to castle howe, across the bog to blea tarn, down to old dungeon ghyll and back to chapel stile.

even without a map it was relatively straightforward to follow in my head ie keep going clockiwise and you cant go wrong. only once did i stop to ask for reassurance that an out of sight tarn was where i thought it should be.

it was one of those great moody lake district days with dark clouds hovering around the tops, patches of drizzle, and ok visibility on the lower fells. some people might describe that as miserable, to me it something altogether different and inviting. 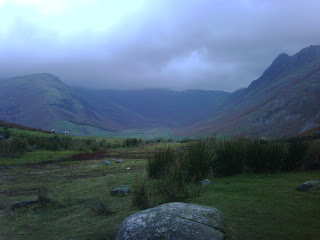 by 1630 the light was fading quickly and although i only had two miles to go, the route wanted to take me higher up the fell. with no headtorch..in fact with no anything i thought the better of this and decided to drop down to the valley track then the road back into chapel stile.

so ok this was a tiddly 9.5m trail/ lower fell route but...
a. it went a little way to restoring my navigational capbilities, but moreso my confidence
b. i really really enjoyed it..no, in fact i loved it!
c. i like making spur of the moment decisions judging by how i feel
d. i also like a lack of pressure in my running
e. bugger! its made me reasses my 2010 plan..in fact my whole plan from here on in..

do i mainly stick to off road? do i mix it up? short, medium or long? race or dont race? any number of combinations here which i'll try and decide on during the coming days and weeks

so much for my cunning plan eh

lets call it 'decisive indecision' for now
Posted by ultra collie at 18:56 12 comments: