i've been intrigued to give ghyll scrambling a go for a long time. for those not in the know, you walk up a mountain alongside the ghyll (mountain stream / river) and then so far up you get in it and come down..sliding on your backside, jumping into the plunge pools below the waterfalls, diving in, 'superman' slides, headfirst backward slides and many more. its cold, its great, it gets the blood pumping. it even features at number 14 in the the uk's top 100 things to do before you die and its the ghyll we scrambled, stoneycroft ghyll, that's the one to do...like the picture below (that ive copied..its not mine) 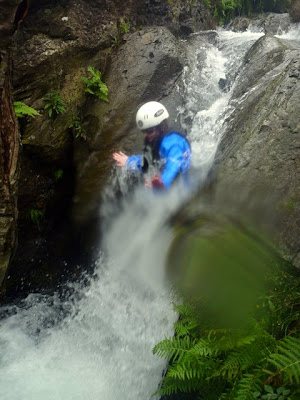 it might not look that exhilirating but get in the thick of it and you know about it. i volunteered to be the first of the group to jump off into the infamous 'washing machine'. i bottled it. hollie then went over, no trouble. i came forward a little later. i bottled it again. once all the others had madly taken the challenge on, i found myself sat all alone, the last to go, on what now felt like the 'ledge of shame'...16 or so pairs of eyes staring up at me..'will he? wont he?' or maybe 'get on with it you big girls blouse'. i stepped forward, took a deep breath and off i went..SPLASH! not so bad after all..mind over matter. anyway if you're up that way and fancy something a little different, that's your fella!

by contrast the rest of the holiday was somewhat less hair raising but by no means less breath-taking for different reasons.

staying for the first time in grasmere, i was able to explore fells otherwise as yet untrood by me. and as we were directly under stone arthur, alcock tarn and the fairfield horseshoe that's where most of our walking / running took place.. 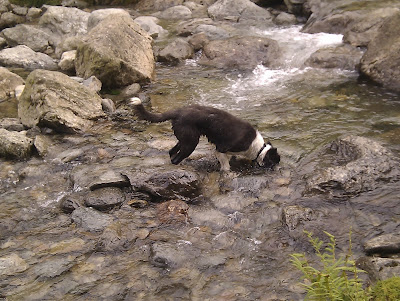 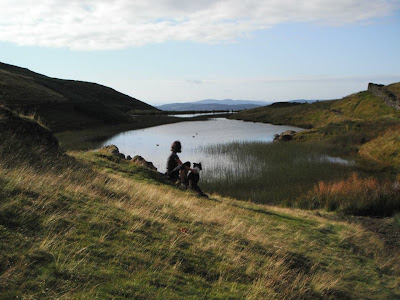 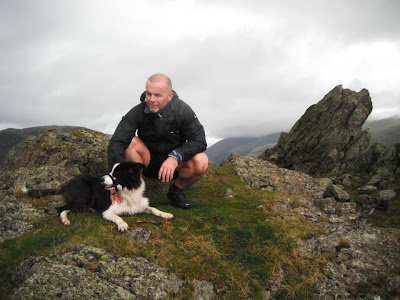 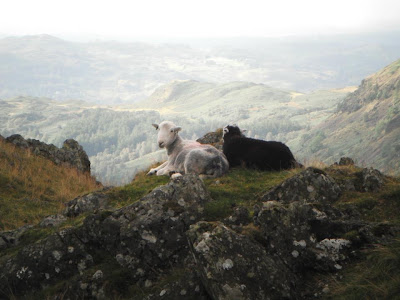 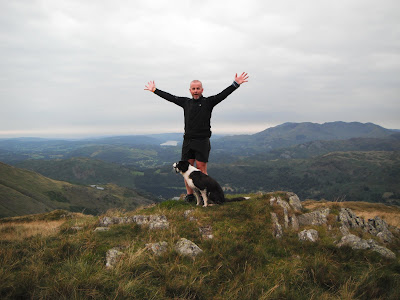 leaving the fairfield clag behind 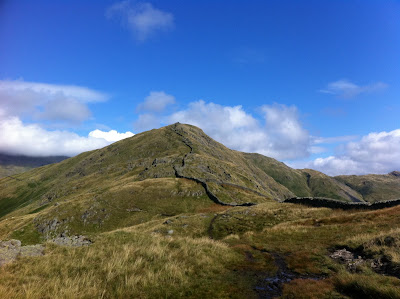 coming off towards ambleside 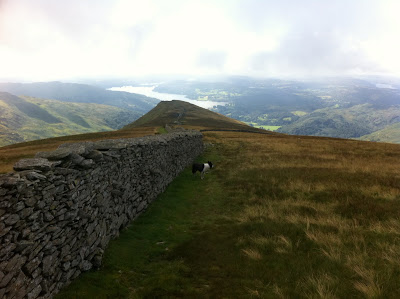 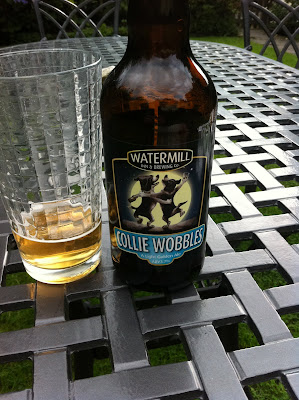 the best thing was that it was around a relentless 3000ft climb in 3 miles up to fairfield from our cottage. a lungbuster indeed. great views all the way until near the top when the clag came down and challenged my mapless/compassless navving..it was all in my head (luckily)

all in all great times

next up, the hardmoors 60 down the cleveland way from saltburn to filey :)
Posted by ultra collie at 15:52 15 comments:

i can laugh about it now

'how are you doing?' came the question from a marshall as i was leaving the first checkpoint at Howtown. 'i'm feeling great. and i'm a minute up on last years time!'. words i was shortly going to ponder and regret.

some short time later there i was, barely into double figures, and on the verge of quitting. not jut quitting the lakeland 50 but quitting ultrarunning altogether. in my head i was penning my ultra running obituary for this blog. i think it was going to say something along the lines of 'been there, completed that, can't be arsed anymore'.
the sun was beating down (uncannily for the lakes), the air was stagnant, my heart was racing higher than it should have been and at a rate too fast to see my through a full 50 miles. a constant drip of beads of sweat falling from the rim of my hat were an ongoing reminder of the effort i was seemingly putting in. and sat on my backside, not for the first time either, a steady stream of other weary competitors climbed on past me. but they were still moving on, i wasn't.
there were no post mortems going on in my head, no self-blaming or accusations of undertraining or not being in the right physical shape to complete the big task i'd embarked upon. none of that. i had an eerie sense of calm defeatism and resignation that my ultra running days were soon to be over. in fact were over. a 2500ft climb over a few short miles had finally got the better of me and that was that. i'd done it many times before with ease but now the only thought was if i could get back down to the Howtown checkpoint for a lift back to Coniston..'taxi for Donaghue' i would hear them say!

with nothing more to prove what was so wrong with giving up?

EVERYTHING. everything was wrong with giving up!

i had karen, hollie, and will monitoring my progress online at home via the event's brilliant progress board. they had been giving loads of support before i left and hidden away loads of tiny little good luck messages in my pack and kit. what message would i be sending my kids (and karen)..'sorry guys, dad couldn't be arsed'
then there were the post event celebrations that were planned in coniston with simon, will, col, nick and others, most of whom were doing the jaw-dropping 100 route (respect to anyone who lines up on the staring line for that one, completing it or otherwise). what was i going to tell them? how could i even consider sitting at the same table as them with my pityful effort and tale to tell!
and finally, 'well done donaghue you've rounded off a great year of non-running and a 3 year stint of ultrarunning with your greatest achievement yet! a DNF!'

with my spirit fighting back my body's call to quit, a guy, who i now know as Dave Coxon, struggles past me. He'd started the 100, got 38 miles into it but was timed out, so he decided to quickly switch his efforts to the 50 (amazing!). now i don't recall all the conversation we had but whatever was said about just getting to the next checkpoint or actually finishing was the ultimate tipping point for me. thank you dave! you were judge and jury. 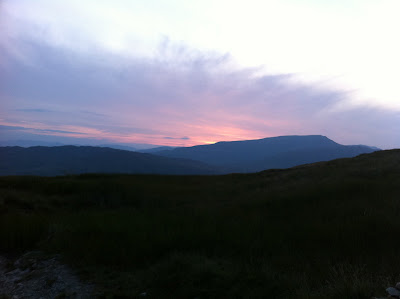 coming off gatesgarth pass i was joined by a chap called adam who i was to complete the rest of the course with and once at troutbeck we were joined by paul (aka four winds). we ticked off each mile swapping tales, smalltalk, and bigtalk, and, as we entered the wee early hours of the morning, jokes that seemed hilarious at the time (you had to be there). paul got a right taste for coffee at each checkpoint to keep him going while i downed my secret weapon of redbull to keep my attentiveness for the route-finding ahead in the dark.

time quickly passed. i was having a ball.. interspersed with a few swear words from time to time when i hit a minor and short lived low.

though 2 hours off my 2010 time, i wouldn't have swapped this whole experience for anything. a tough, demanding but inspiring course. the magnificent checkpoints and people manning them (especially the log burner at chapel stile), the roars and cheers from the pub crowds as we trailed through ambleside. the highs, the lows,and the in-betweens. the friendships made and the passing acquaintances.
and three ordinary guys who started the race probably looking quite normal who after 50 miles grinned inanely at the finish line taking on what can only be described as alien-like appearances 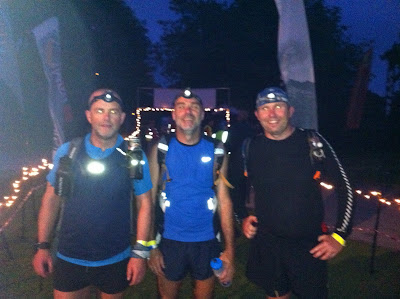 and as the early hours morphed into day, we all met as planned to trade our war stories..celebrations, comiserations, each and every person a true winner.. til late into the night, starting with a pint of the stuff below in honour of absent friends. and as pints were downed the talk turned to coming back next year for seconds or thirds. and the more pints downed, the more the talk was of the 100 mile challenge. before anyone could talk me into such madness i sloped off and headed off to the sanctury of my bed. 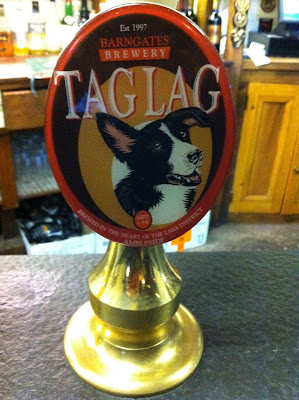 (special thanks go out to mark, terry, lauren, and all the helpers who clearly go more than an extra mile to make this by far the uk's best ultrarunning event ever)
Posted by ultra collie at 12:26 18 comments: