so do i still like to be beside the seaside?

im a big fan of blustery beaches and rugged coastlines. i have my favourites, that provide something more uplifting beyond the ordinary. the secret sun-drenched coves of the algarve. the expansive , tranquil shoreline of inchydonney island. and the dramatic coastal cliffs that hug our very own shores, battling rock against wild seas, protecting our land as best they can from continual ocean erosion. one favourite stretch for me being the east yorkshire coast. a place frequently visited as a boy for days trip to whitby, scarborough, runswick and robin hood bays. 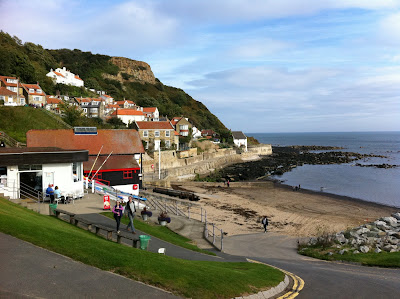 memories wrapped in 99's (with sprinkles and monkeys blood of course), proper fish and chips eaten out of newspaper on the pier, rockpooling, and the odd go on the rides and amusements. happy days. it never rained. did it.

so the hardmoors 60, from saltburn all the way to filey (a bit more if you fancied it, i didn't so it was hardmoors 55 for me in reality) would always be calling me on its inaugrual outing.

a 0530 coach pick to take us to the start meant a stayover in filey the night before, and a chance to catch up with simon moorehouse over a couple of pre-race local ales at fileys finest hostelry 'bonhommes'. a late finish after the event saw us do it all again, back in 'bonhommes', until the early hours of sunday morning in the company of some fellow racers and the very blunt and entertaining mark dalton, a good friend of drunken euphoria (a fellow blogger for those not acquainted with him, not a state of alcolohic intoxication)

enough of the social side, what of the event? well, there's a clue in the name. in fact two clues. it's not called 'easymoors' and it's 60 miles, take or leave 4-5 miles either side of that. 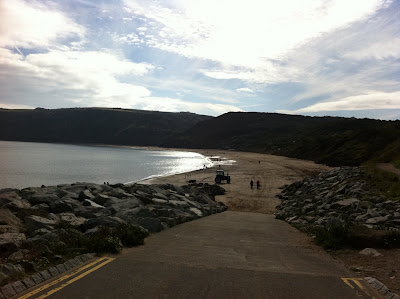 the weather was perfectly warm with a gentle breeze. the sea glistened and all felt good in this little bubble i found myself in (runner number 13). ticking off mile by mile, it all seemed too runnable and too easy for the first 20 miles or so. 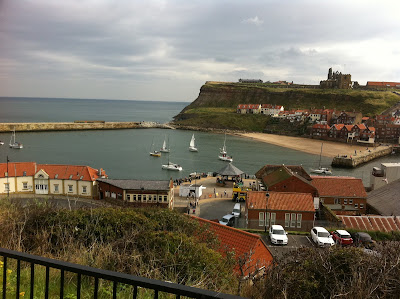 then along came whitby, its throngs of tourists brining me to a walk, dodging through them all as the licked their ice creams or gorged on their take out chips n scraps..each and every one lookng at me as though i was some alien space ranger..it felt quite awkward but part of me felt great to be different and not just a day tripper filling my big greedy guts on a never-ending conveyer of junk food and retail tat. sometimes, most of the time, there's a better way to live.

maybe, retrospectively, part of my positive mojo was sucked out of me by the whitby massive, as once up the 199 steps to the abbey i never really got back into the 'swagger' that i'd so enjoyed during my first 20 miles (it probably didnt look like a swagger to the outside eye but it felt like it to me!). the going got tougher, mentally and physically. my food tolerence plummetted and i soon found myself mainly relying on liquid (coke, red bull and water..but never mix your drinks kids) for energy input. and my tolerence for a never ending series of steep steps or stones down to shore level and then back up the other side was becoming to be seriously tested.

a mile or two on and i caught up with simon..my first bit of company that day really. with my rantings about never doing an ultra ever again, i bet there were times when all he wanted to do was to put a bit of a shuffle on to lose my dulcit tones. a stop for pop (sprite) and crisps (seabrooks salted of course) at robin hoods bay quickly upped my mood (as well as losing us ten minutes queuing in the shop)

we did have a laugh too though.

we laughed when we got into the ravenscar checkpoint with just 30 seconds to go before the time-out cut off point.
we laughed at how much our feet hurt and how we struggled like a couple of old crocks down sharp steep stepped descents (try saying that quickly ten times).
and we laughed when as dusk fell, headtorches donned, and getting a bit lost in scarborough (well we got a bit lost, maybe we didnt laugh so much)

by the time we eventually found the elusive scarborough checkpoint at mile 44/45, we were well 'out of time' and i couldn't wait (i was actually excited at the thought) to be taxied back to filey for an 'early bath', some lovely fish and chips, and a few glasses of wollop! and that would be that. the end to my agony of running ultras..forever! and a fine, memorable way to end it all with a DNF!

cue the sliding doors moment as the lovely checkpoint girl says 'you've done really well, are you really sure you dont want to carry on to filey?'. maybe she just wanted to get off home and not having to bother to taxi us back? but without thought i said ' so how far is it?'. 'only about 8 miles came the reply, you'll be fine'. as fast as we'd talked ourselves out of the race a tad earlier, we talked ourselves back into it and avoided the 'taxi of shame' back to filey.

so off we went back into the dark, me charged up and high on another can of red bull (it gives you wings you know..reckon there's a good advertising line in that) 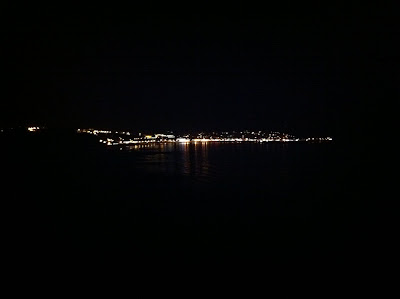 i really love running in the dark, though im sure residents of the two caravan parks we had to pass through must have viewed two headtorch-cladded blokes at 10pm with a slight degree of suspicion!

to pass time we debated whether the path mileage signs signed 'filey' were actually to filey itself or filey brigg. i was hoping for filey, simon 'filey brigg' moorehouse adamant they meant filey brigg. it could have ended in tears.

anyway, fast forward an hour or so. we're back in 'bonhommes' having a few sherberts and some great craic with a few others and mark dalton (already washed, changed and fed), exchanging war stories, how much harder it was than anticipated and how some might do the even harder and much longer hardmoors 110. its called the hardmoors 110 because....

what a strange day. highs. lows. mediums. more lows. then elation at finishing. is this the eternal emotional ultra pattern? a technical DNF by missing the silly loop at the end (running out the other side of filey for a bit then back) that's to be scrapped anyway in 2012. last (a lifetime ambition) into filey of those that made it there of the 52 starters..though i think a good number didnt make it that far.
and i'd gone another full circle yet again. from loving ultras to hating ultras to (maybe just maybe) loving ultras. or maybe not.

im just glad charlie wasn't there. i think he'd have disowned me!

but whatever, there's always a new day dawning 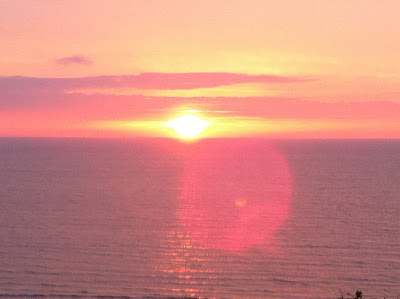 collie's round up (and inane ramblings)

so..we pass from summer to autumn in the blink of a day. some might say 'what summer?'. to me it doesn't matter. there are things in life you can change , and other stuff you can't, so just go with the flow in some cases. besides i really love the seasons here and the differences we experience running through them
it wasn't that long ago that i felt the year just ticking slowly by. before we know it we're heading towards Halloween at brake neck speed.
hollie and will have both returned to school, both moving up a class and the stakes grow.
karen and the 'boys' just keep improving so it's great to see their rise as they head into the autumn eventing schedule, with the great elemski coming into his own at such a young age. go guys!
as for me and the pooch?
let's start with his nibs. he must be the best part of 10 years now or thereabouts, making him hitting on late 60's in dogs years. but you wouldn't know it. he is as he was two/three/four years ago..leading by example..at the front..me in tow. and i'd like it to stay that way for as long as i can. so, he's no longer going to be entered into real long distance stuff but will be my guide and pacemaker for all my training runs and any stuff under 30 miles. this way i'm sure we'll stil be running together for some time yet.
and as for me? well let's just say the jury's out for 2012. i still have the hardmoors 60 next week but what the future may bring is anyone's guess..any suggestions guys???
Posted by ultra collie at 19:42 10 comments: