after my now too frequent whinge in my last post earlier today we were back out for another 11miles (giving us 32 in total for the weekend)and it ran really ok. ok so the terrain was a bit easier with more flat than normal but all in all a pleasing trot out. and charlie, who must have twigged he was in my bad books, was much better today too. so its a week coming up of less miles but more intense quality sessions. happy days :)
Posted by ultra collie at 16:05 11 comments:

another 21miles yesterday of ups and downs, in topography and emotions. it started on flat muddy and sticky terrain...i could hear hayfella's comments in his last post haunting me. but then as we started to climb so did my feelings..this is what running's all about. we peaked at the roaches trig..

..ran over to and up hen cloud and made our descent into meerbrook and then over to abbey green. then a flat slog back home of 6 miles that felt as long and spirit sapping as the whole 21 itself.
i fell out with charlie a few times too. he seems to be getting worse with other dogs after one attacked him the other week so that didn't help my disposition.
we'll keep going and hopefully turn the corner soon.
its 5.30am, the wind swirling outside and soon time to get amongst it all over again
Posted by ultra collie at 05:30 2 comments:

it's official. me and the pooch will be heading off on our great c2c adventure during the last week of july. all the necesary permissions and pass outs from home have been secured so all we need to do now is a bit of planning and, oh yeah, step up the training a bit more too. now, where's that map and the book of best camra pubs to stay in?

it'll be amazing to run from/through/to what are probably my favourite places - cumbria and yorkshire. and to do it with charlie will be very special and the best company i could wish for along the way. 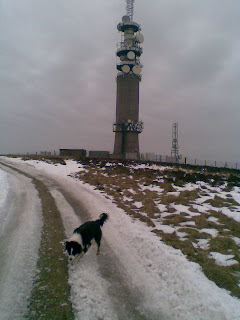 amazing the difference in climate of a few hundred feet. we set off on saturday round the 'up on cloud nine' route which takes in a number of local highspots and lowlands. i had thought the snow and ice had long gone...certainly on the lower lying areas...but was amazed to enter 'another world' when we reached our highest point at the telecom tower hill. snow drifts and ice still aplenty...charlie was in his element...so that was 19miles done and dusted..followed up by 11+ on sunday.

so now we're back to our tried and tested 'sandwich' 08 plan of two long weekend back to back runs with a rest day either side. hence the sandwich. 30 last weekend. 35 next. 40 after that etc. maybe the highland fling in april is starting to feel doable once more.

and in a moment of madness ive deceided that the 190mile coast to coast trip will go ahead in july. so we'd better get planning it all!
Posted by ultra collie at 12:46 4 comments: 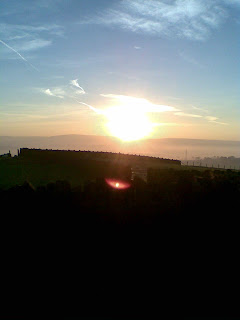 its amazing the effect a few kind words of support from friends can have - thank you. hopefully i've come out of a short-lived dip and rising upwards once again.
so out we went early doors at 5.30 for a little lane trip round the village and cloudside. spirits were bolstered by the fresh crisp air and fairly clear skies...and we were running!! it really felt like a new day had dawned.
folowing that, its sprint hills for lunch then two long outings on saturday and sunday, both across routes with lots of runnable sections.
this morning at work sz was beeming like a cat whos got the cream at his improvements from track work. just goes to show the old addeage my mate kev always says ' to run faster you've got to run faster'.
that's the simplicity of it all i guess.
Posted by ultra collie at 09:38 5 comments: 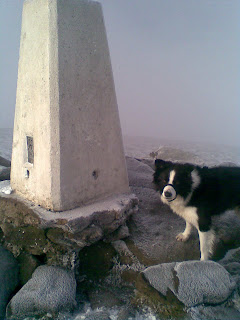 i've been struggling for a few days to muster the enthusiasm to get out and run. i don't know if its the weather, the pressure at work, just me or what it might be. the run , 'that run', at the weekend was mentally painful and got me wondering whether i wanted to continue all this long stuff or go shorter or even chuck it all in. i seem to be well behind where i was this time last year and i'm lacking overall discipline both in running and dietary terms. i have some big challenges looming that last year brought great excitement and anticipation whereas today they are more filling me with dread and anxiety..but maybe this is just a reflection of a general phase, hopefully short, that i'm currently going through.

charlie is oblivious to all this...or maybe he isn't. maybe we just need to open up some new fresh undiscovered ground to reinvigorate the thing that until right now has brought me so much fun, happiness, vitality, and the chance to see so many inspiring places.
Posted by ultra collie at 10:56 3 comments: 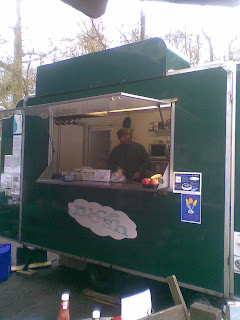 or should that be 'slow running'? in fact it was both. me and the pooch had planned to tackle our local 'anytime challenge' - a 20+miler visiting 5 local trig points. so we set off from macc forest thinking we'd be done and dusted in say 5 hours or so but with little knowledge of what lay ahead for us. our, or should i say my, early morning spring in step was so turn into a trudge across snow drifted moorland. its a difficult route at the best of times but add in thick snow and ice and soon you feel the energy sapping with seemingly little progress being made.eventually we reached roach end and climbed up to the trig point. as if to make my feelings even more despondent the clag was coming down and visibilty taking a tumbling. i looked at my gps...it had taken the best part of 2 hours to cover little more than 6 miles!!!! looking over to where we should have been heading next i could see that it would be difficult to routefind..over unknown moorland in the snow with poor visibility. it was doable but i just felt we could have been out for a long long time and for the first time in a long time i wasn't enjoying the outing. i wanted to run not feel like i was trudging along with massive weights attached to me.
i must say these were just my feelings and not charlie's. he was having a snowtastic time and loving every flake that had fallen.
the light at the end of the tunnel was the sight of 'posh nosh' back at macc forest - 4hrs 48mins and a lowly 15.07miles later. our compensation was a lovely bacon sausage and mushroom butty each and our spirits lifted.
to make amends and do some proper running we headed out of the door for a non-stop 11mile run on sunday, returning with my faith in running and , more importantly, my faith in being able to run well and truly restored.
Posted by ultra collie at 10:54 2 comments: 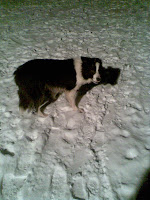 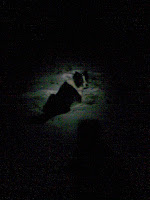 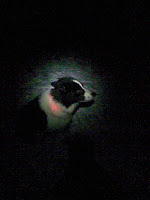 snow puppy (in memory of charlie 1)

i wondered whether i too should mention 'the snow'. it's everywhere. on the tv. on the radio. in the papers. even on the ground. so it was lovely early this morning to lace up whilst it was still dark and head out for a gentle x-c trot with charlie. the clear sky and the crisp white coating gave some visibilty but my headtorch still helped ensure i didn't twist an ankle. charlie loved the adventure, spending as much time rolling in it as running on it.
it made me cast my mind back to the first collie i had, also called charlie. we got him in the winter and it was snowing then too. i have a lovely photo of him on the fridge entitled 'snow puppy'. he was delightful, my first ever dog and it was with him i really took my first few strides out running. i owe him a lot too.
today i felt his spirit was within us both as we skipped across the white morning landscape
Posted by ultra collie at 16:30 2 comments: