the rest has ended,the training's begun 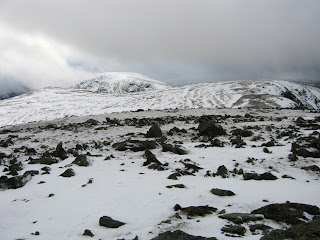 it only seems 5 minutes since i was coming through the Snowdononia Marathon finish line at the end of October. That sounds the 'end' of our running year. the usual sequence of events post snowdon are eats lots, drink lots, and eat/drink some more. this celebration usually last anything up to two months, though i vow that in 2009 i shall be a man of less extremes.
anyway, it looks like the rest (of sorts) is over. yesterday we headed up to the lakes for a training run which would take in the first 16miles or so of the lakeland 50. having been out partying til the early hours of saturday morning, i could have done with something a little easier. alas it wasn't to be and so, along with a small but fairly fit bunch of like-minded idiots, we battled the chilling winds, snow and ice that clung to the fells and tops for a good 5 hours. often up to knees in snow it was surely an adventure. the race actually takes place in august so by then hopefully it will have melted and there will be no need for full winter mountain wear and kit.
that said, we wouldn't have it any other way but it does mean that we're off again so the partying needs to receed (maybe just a little)
Posted by ultra collie at 15:56

i hope you're not getting charlie drunk! just had a look, it's the same weekend as borrowdale :(

but you know 50miles is better than er er..
i guess that defines what i really love...the long stuff vs shorter and more intense races (though i know you wouldn't exactly call borrowdale 'short')

i do know what you mean but borrowdale is a classic race and i didn't get an entry last year, so it's on my wish list. i really like the high level routes. having said the lakeland 50/100 looks likely to turn into a 'classic' too.